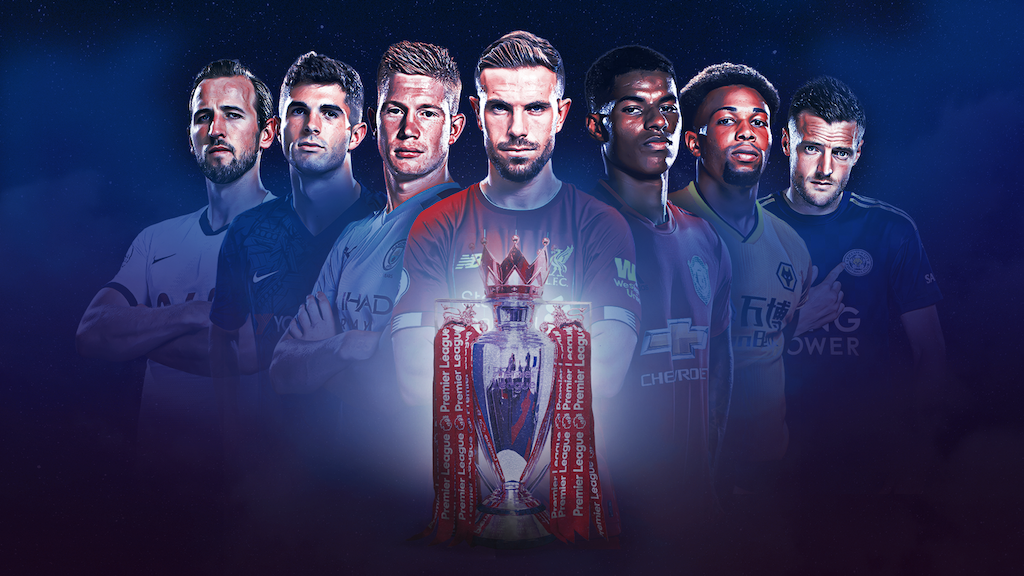 The English Premier League reached the halfway point last week, and it’s time we talk about betting Premier League futures. All 20 teams have two games scheduled in the next six days if COVID-19 cooperates. Because of postponements, not all teams have played 19 of the 38 games scheduled. But 12 teams are fully caught up through the first half of the schedule.

Two teams, Everton and Aston Villa, have played only 17 games, while the other six have played 18 matches.

Manchester United Top of the Table

For the first time since legendary manager Sir Alex Ferguson retired with a title in 2013, Manchester United are top of the table at the halfway point. Manager Ole Gunnar Solskjaer has United with 40 points on 12 wins and three draws.

But rival Manchester City is just two points back, and it has an extra game to play. Leicester City has played 19 games and is also two points behind United as it bids to win its second title in six years.

Liverpool, the defending champions, hasn’t scored in its last four Premier League games and have slipped to fourth with 34 points. Tottenham was on top on Christmas Day but has fallen to fifth with 33 points. It has one game in hand on Liverpool, Leicester City and Manchester United.

The aforementioned Everton are in sixth with 32 points and the two extra games to be scheduled.

Before we move on, let’s take a look at soccer betting strategies.

With that extra game in hand coming against 10th place Southampton, Pep Guardiola’s Manchester City side is the favorite to claim the title at -250.

City have found their form over the last month with six straight league wins in which they have outscored the opposition 13-1. They have survived without star striker Sergio Aguero.

But they now face a four- to six-week stretch without team MVP Kevin de Bruyne, who suffered a hamstring injury last week. That shouldn’t hamper their high-powered attack in the next two games in January. But City faces Liverpool and Tottenham on consecutive weekends in February.

Anyone looking at betting Premier League futures knows that Manchester United are +550 to lift the trophy for a record 21st time. Paul Pogba has returned to his World Cup-winning form to team with Bruno Fernandes and Marcus Rashford. United hasn’t lost in their last 13 league games.

They next face Sheffield United before a weekend trip to Arsenal, the last team to beat them in league play. The February fixture list is rather kind to United before a March 6 showdown with Manchester City.

Liverpool needs to find goals and find them in a hurry. The good news is they scored twice in the FA Cup fifth round on Sunday. Mo Salah bagged a brace, but they still lost at Manchester United 3-2.

Liverpool are +800 to repeat as champions, something that has only happened once since 2009 (Man City 2018-19). When looking at top soccer betting strategies, you need to take past trends into consideration.

Leicester stunned the football world when they won the Premier League in 2015 as +5000 long shots when the season began. Striker Jamie Vardy is out for a few weeks with a hernia.

But James Maddison and Harvey Banes have picked up the goal-scoring slack to keep Brendan Rodgers’ squad in the top four. The Foxes are +1200 to win this season.

Jose Mourinho is no stranger to Premier League titles with three at Chelsea. He can cement his legacy by leading Tottenham to their first title in 50 years.

The attacking duo of Harry Kane and Hyung-Min Son is formidable, and Spurs have allowed the second-least goals (17) in the league this season. They are +2000 to win the 2021 Premier League.

The other teams have fallen well below the top five in betting odds. Chelsea (+12500) fired manager Frank Lampard on Monday, and Everton (+12500) has struggled to find consistent scoring.

Seventh-place West Ham United was in a relegation battle to the end last season. It is now +15000 to win a surprise title, better odds than London neighbor Arsenal (+25000).

At the bottom of the table, Sheffield United has just one win and five points from 19 games. It is -2500 to be relegated to the Championship at season’s end. When looking at betting Premier League futures, there are many directions to go.

West Bromwich Albion has 11 points and is -500 to be relegated, while fellow newcomer Fulham are -120 with 12 points and a game in hand.

The teams currently in 15th to 17th place in the table trying to avoid relegation are Burnley and Newcastle with 19 points each and Brighton & Hove Albion with 17 points. Burnley has a game in hand and is +350 to be relegated, while Newcastle is +220 and Brighton is +300.